I could not review the third book in the series, Monster in the Hollows, simply because I wasted few minutes between reading it and reading this one. While I have the big picture items clear between the two, the story just flows so much together that I have a hard time separating them for purposes of writing a review.

“Janner’s heart somersaulted with shame, embarrassment, envy, frustration at himself, contrition, gratitude, and then more frustration. As soon as he settled on one feeling, the next one crowded it out… He felt as if he were two people: one boy who saw the situation objectively, who knew the right answers – which were to be content with his lot, grateful to the Maker, humble to his calling – and another boy whom he hated, who felt things hotly and demanded attention like a child throwing a fit… be glad the Maker is real; be glad you get to be a part of this. He would settle for a moment, even breathe a sigh of relief. Then, like a rat in the kitchen, a dark thought would skitter across the floor of his thoughts.” (The Warden and the Wolf King, chapter 89)

This apt description of how we feel about our true selves is poignant and almost holy. It is, however, sort of standard in a hero epic like this. It is important because we want our heroes to be holy. To be noble. To be authentically human and complex. But so often, authors stop there. They keep the control in the hands of their heroes.

What distinguished Peterson’s writing from so many lesser hero stories out there is this next bit. The part that describes the invasion of grace. The honest and touching explanation of what happens after we submit to the Maker and He takes control of our hearts.

“Gradually Janner began to understand, deeper in his heart than any of these other thoughts or feelings, that what was happening inside of him was the Maker’s doing. Just being this close… stirred the muck in Janner’s soul so that every broken part of him floated to the surface and was drawn in sharp relief, just like those dust motes… The light (omitted to eliminate spoilers) illumined his heart…

“What?” Janner said aloud, looking around for the owner of this voice. Someone had spoken but whom? When he tried to remember what the voice sounded like, its quality vanished from memory. Then he realized that, of course, the one who had spoken has also made the world. Janner trembled.

“Yes sir,” Janner whispered. He knew the voice and had always known it… He knew himself as he was known. He saw, and was still… A great love enveloped him… The voice repeated the words again and again, like a beating heart, until Janner was at last able to obey and to rest, rest, rest. Janner encountered – absorbed – an abiding peace that he would never forget all the days of his life.

He was still. And he was loved.”

The third and fourth books in this gorgeous series offer us much to contemplate and they arouse in the reader a sense of connection to heroic ideas that are still relevant today and belong to all of us.

Book #3: Monster in the Hollows (Audible version here) has many themes and loads of interesting landscape. A fascinating look into school (guilds), an incredible subplot with Nia and a new pastoral scene which is precariously held like holding one’s breath. The lost are found. The blamed are found blameless. The monsters are real but they are not monsters at all. What starts as a hopeful, restful, pastoral story line is marred by tremendous loss and suffering but always pushes forward, reaching for the light.

Book #4: The Warden and The Wolf King (Audible version here) is almost double the size of the first book (On The Edge of the Dark Sea of Darkness) because it has a tapestry to finish weaving. So many threads from the first three books to bring together and a few more still to discover in this tome. This book is, without question, the best and the hardest. It is a constant series of triumphs and defeats and so much sacrifice. Like the final Harry Potter, LOTR and Narnia books, so many good characters will lay down the lives honorably and with hope in a good and loving Maker. 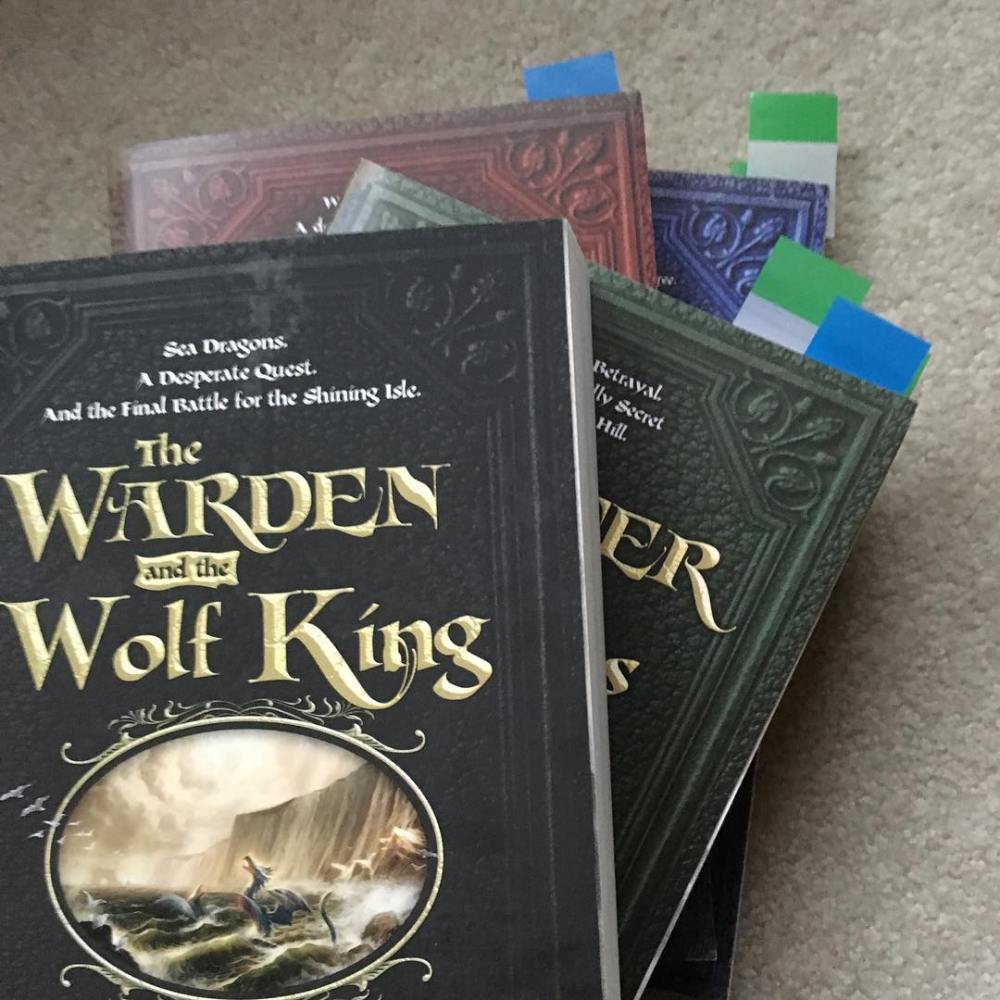 Without having a progressive social agenda, these books illustrate with absolute beauty the diversity in family relationships and the critical need of a father figure in the lives of central characters.

In one situation, we have a missing, presumed dead, father whose role must be filled by a grandfather and uncle. In a different situation, we have the possibility of a stepfather trying to find the right way to love children that are not his by birth (but are by love) without diminishing the memory of their father.

In another situation we have a gorgeous adoption story between unlikely characters who realize how much love they are capable of if only they will let their armored hearts be pricked. Peterson uses such beautiful descriptions to contrast the abusive father with the protective and loving adoptive father.

Finally, one of my favorite characters is also adopted and it is clear that her adoption is a blessing not only to her but a precious gift to her new family who can love their losses through her. 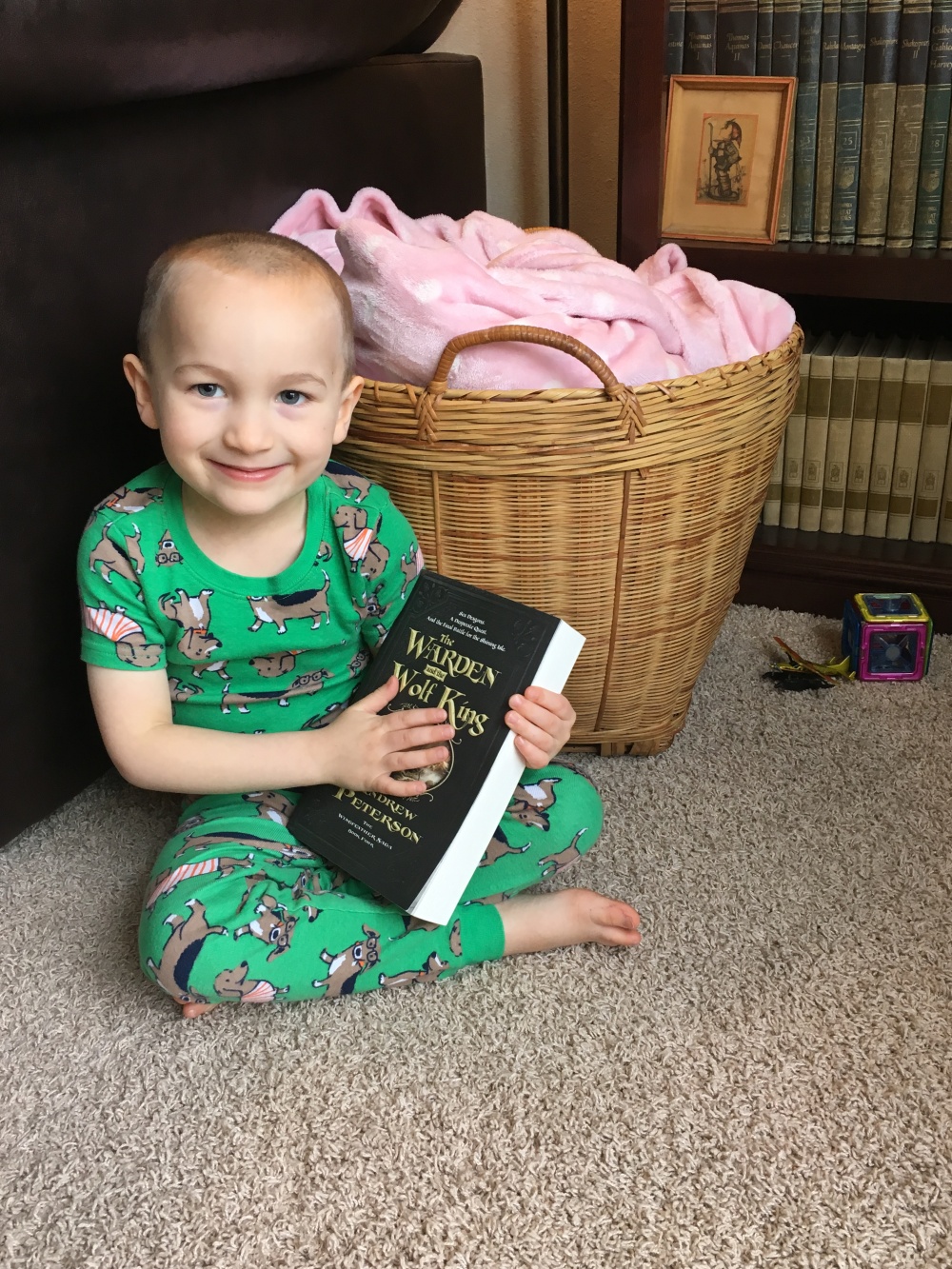 Without trying to be, I think, this book is very socially conscious. But it is so because all of these relationships are metaphors for spiritual relationships that all of us can identify with. The spiritual gifts of adoption that confer royalty on any who are willing to accept it are seen here in their many forms.

The death toll in this final book is, as expected, intense. The violence is real. But what really propels the book forward is “why” behind it all. Who is our villain? What made him a villain? What does he want? How much will he destroy to get it? How did these creatures become creatured? Why do the heroes do what they do? Why did the Maker allow all of these things to happen?

The book ends with a jarring and gutting sacrifice. I happened to have ended during Holy Week and I cannot escape the realization that the book ends, clearly, on a Good Friday note. There is, however, an epilogue. The epilogue is another example of how this is different than other modern hero stories. The final chapter of the book ends like The Iliad. A lot like The Iliad, as a matter of fact. But the epilogue gives us the Holy Saturday and Easter Sunday. It is not clear. It is a mystery. It requires us to look backwards over the first three books and study the signs and miracles and then take a leap of faith – but it is there if we want it.

A powerful and important series. Clearly inspired by a love of the classics and the One True Classic. These are the kinds of stories that our children need to read. To paraphrase Chesterton they need to know that the dragon can be beaten by the grace filled hero in each of us.

Check out the review for On the Edge of the Dark Sea of Darkness here.